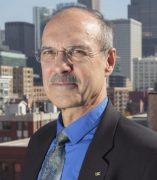 Special Advisor to the GFRC

Special Assistant to the Chancellor

Michael A. Pagano is the former Dean of the College of Urban Planning and Public Affairs at the University of Illinois at Chicago, former Director of UIC’s Government Finance Research Center, professor of public administration, Fellow of the National Academy of Public Administration (elected 2006), former co-editor of Urban Affairs Review (2001-2014), and former Nonresident Senior Fellow of the Brookings Institution's Metropolitan Policy Program.

He has published eleven books, including The People's Money,  Metropolitan Resilience in a Time of Economic Turmoil , Cityscapes and Capital and The Dynamics of Federalism, and over 80 articles on urban finance, capital budgeting, federalism, transportation policy, infrastructure, urban development and fiscal policy; since 1991, he has written the annual City Fiscal Conditions report for the National League of Cities. He has delivered more than one hundred papers and speeches and received funding from John D. and Catherine T. MacArthur Foundation, the National Research Council, Lincoln Institute of Land Policy, Pew Charitable Trusts, Brookings Institution, CEOs for Cities, National League of Cities, Chicago Community Trust, U.S. Advisory Commission on Intergovernmental Relations, and elsewhere.

He has served on a variety of professional organizations, including NASPAA (Network of Schools of Public Policy, Affairs, and Administration), the Governmental Accounting Standards Board, the Metropolitan Planning Council (Chicago), the Pension Committee of the Civic Federation, and the Urban Land Institute.

He earned a B.A. in Latin American Studies from the Pennsylvania State University and a Ph.D. in Government from the University of Texas at Austin in 1980.