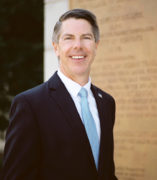 Chris Morrill is the CEO of the Government Finance Officers Association (GFOA) of the US &amp; Canada. GFOA, with more than 19,000 members, promotes excellence in state and local government financial management.

Morrill co-authored The Savannah Story: The Road to Equity and Sustainable Community Development in Economic Development in American Cities: the Pursuit of an Equity Agenda. He was in the first group of U.S. Peace Corps volunteers in the former Soviet Union, where he advised the City of L’viv, Ukraine on finance and
management issues.

Chris Morrill is an International City/County Manager Association Credentialed Manager. He received a bachelor of arts in political science from the College of the Holy Cross in Worcester, MA, and a master of public administration from the University of North Carolina at Chapel Hill.